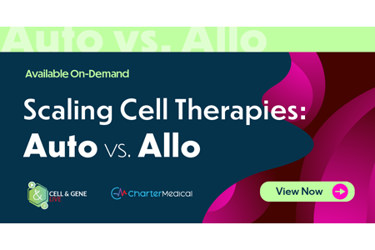 Cell & Gene Live events cover some of the timeliest topics facing the CGT sector. Our most recent Cell & Gene Live, Scaling Cell Therapies: Auto Vs. Allo, is one such event. This Cell & Gene Live’s focus centered on the need to develop processes that scalable and suitable for a manufacturing environment to scale auto and allo therapies. Michael Blackton, SVP Cell Therapy Manufacturing at Nurix Therapeutics and John Lee, VP Head of Cell Therapy at Center for Breakthrough Medicines shared their expertise from the biopharma and CDMO points of view, respectively.

Lee set the stage for us by stating we, as the CGT sector, are at a critical inflection point regarding scaling out autologous therapies. “We have a handful of FDA approved cell therapies in the oncology space, as well as some non-oncology applications,” says Lee. “We have approximately 1,500 clinical trials underway. Understanding what’s going on with scaling out and the limitations and potential solutions is extremely important.” He explained that Kite is one of the companies leading the way, as early on, Kite manufactured their products in California before expanding into the Netherlands, and more recently, opened another facility in Maryland.

According to Lee, one of the primary challenges across the board is the regulatory environment. As innovator companies and manufacturers begin to branch out and create their products in other venues, a comparability assessment needs to be completed – a key component for autologous therapies or products as they are commercialized. Similarly, from an operational perspective, unlike allogeneic therapies where scaling up is necessary, autologous scale out falls on several things. “Obviously, you need the facility as well as the personnel and equipment within the facility, and as a general rule, the world doesn't have enough qualified personnel at the moment to scale out as effectively and as quickly as we’d prefer,” Lee laments.

Blackton explained that the sector is faced with two things when it comes to autologous scale up. “The first issue is scale up or scale out within the facility, and that’s where you get into cross-contamination issues and ensuring product safety within that facility,” says Blackton. “Then there’s various facility designs. You’ve probably heard the term “ballroom concept,” which presents some opportunities and challenges versus individual rooms per patient. Scaling out across geographies because you’re dealing with not only supply chain issues across different geographies, but also jurisdictional issues with different regulatory requirements. But I think it all comes down to life cycle practices. If you have adequately thought about your process develop that process with consistency in mind taking into account aseptic processing requirements, for example, cross contamination, patient scheduling, then you’re well suited to a scale out scenario now rather than talk about individual technologies,” Blackton says.

We’re still in early days with allogeneic therapies, as we are trying to focus on some of the rate limiters, which largely include downstream processing, harvesting formulation, and increased volume from a scale up perspective. “There's an underlying issue with allogeneic scale up and that is the maintenance and integrity of the drug product,” says Lee. “As measured by functionality, there is a big push, especially in the world of T-cell immunotherapies to adhere to this stem cell memory like phenotype. As you try to achieve the numbers of cells that we're talking about in the allogeneic world, a typical harvest, the goal is somewhere between 10 to the 11th and 10 to the 14th cells per batch.” Yet to achieve that level of expansion, the possibility exists that you're going to end up with, a phenotype within that population that are more differentiated than phenotypes that have not been expanded to such a degree.

Of course we covered far more than the scalability challenges facing auto and allo therapies. During the hour, Blackton, Lee, and I discussed starting materials, because when it comes to quality and consistency of raw materials, acquisition of starting materials is critical to the success of the therapy. We discussed roadblocks for auto when it comes to starter materials. We also discuss donor cells; aseptic processing; track and trace / chain of identity; supply chain issues, and much more. If you were unable to attend the live event, or even if you attended, but you’d like to revisit the discussion, you can view the entire session on demand. Report back and let me know what you’ve learned, what you’re still curious about, and what we should cover next with regard to scaling auto and allo therapies.