Maximizing Yield For Attachment-dependent Cells With The Corning® CellCube® System 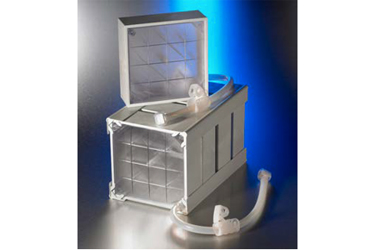 Scientific progress in the cell and gene therapy field will accelerate clinical cell therapy programs in the coming years6,13. As cell therapy trials advance from pre-clinical research to late-stage trials, cell culture platforms will need to meet increasing demands for cell yield1,15. To meet demand, traditional production methods that rely on planar cell culture vessels will require improvements in scale-out ouput5,8, which can be quite tedious as a manual process7-9. The challenge, then,  becomes establishing an adherent culture platform that can scale from relatively small needs of pre-clinical studies through Phase I/II trials and into Phase III. As a result, the ability to scale-out will ease the transition from process development to manufacturing3,11.

In the current study, the CellCube system was used for expansion of two commonly used bioproduction cell lines – HEK293T and Vero. The basic closed system was configured with a peristaltic pump to drive continuous circulation through the CellCube 100-layer module (Figure 2; Corning 3264) and paired with the Eppendorf BioFlo® 120 (controller; Eppendorf B120ACS000) with a BioBLU® 3c single-use bioreactor (SUB; Eppendorf 1386000300) for medium conditioning. The controller simplified oxygenation and pH control of the circulating medium. Medium conditioning in the SUB was sufficient to sustain both HEK293T and Vero cell growth in the CellCube 100-layer module for 5- and 6-day expansions, respectively. Final harvest yields for both HEK293T and Vero cell lines greater than 10 billion cells demonstrate the utility of the CellCube system for mass culture of adherent cell lines with efficient medium usage.