Glimmers Of Hope For Solid Tumors 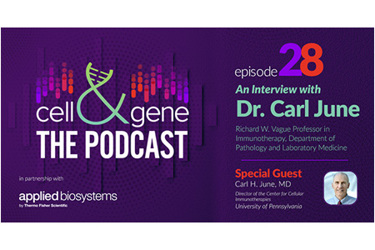 For those in the CGT sector, and perhaps even broadly within healthcare, Dr. June is a household name. He is often referred to as the Father of CAR-T cell therapy and is an HIV gene therapy pioneer. During our discussion, Dr. June and I discussed the groundwork for immunotherapy that began in 2003 with the mapping of the human genome. He is one of the pioneers of CAR T cell therapy, and the work of him and his team has led to FDA-approved therapies. Today, Penn Medicine’s world-leading researchers are developing new immunotherapies to treat cancer, as well as other diseases, including MS, Parkinson’s, Alzheimer’s, infectious diseases, and more. From an immunotherapy perspective, Dr. June explains what he and his team are currently working on, researching, etc.

A Glimmer of Hope for Solid Tumors

One of the topics we discussed is the future of solid tumors. Dr. June explained that due to the many current trials for various solid cancers, there are, in fact, “’glimmers of hope’ that there will be activity [with solid tumors],” he stated. “So far, we’ve been generally disappointed in solid tumors compared to the outstanding results in blood cancers. Research is showing the mechanisms of resistance in solid tumors. For instance, a pediatric brain cancer paper was published in Nature this year from a group at Stanford. In a small number of patients, in what is a uniformly lethal brain cancer in children where there’s literally really almost no therapy once a diagnosis is made, they're now extending the lifespan of these children with CAR-T cell infusion. That’s promising, because it’s a solid tumor and it’s in the brain, which is traditionally difficult to treat with immunotherapy.”

Dr. June went on to report that there have been responses in prostate cancer, the most common cause of cancer in men. He noted that while more research is definitely needed, he referenced a very exciting paper that was published recently in the New England Journal of Medicine about a group out of Portland, OR that used T-cells to treat a woman with metastatic pancreatic cancer, which had a “striking result.” And, so, “there are glimmers of hope that this issue in solid tumors will be solved now that many groups around the world are working on it,” he shared.

Dr. June and I discuss the past, present, and future of CAR-T cell therapy and what is on the horizon for the field of immunotherapy. This is a can’t-miss episode of Cell & Gene: The Podcast. Dr. June delivers not only data-driven insight, but also reminds us that while hope is typically not a strategy, that yes, in fact, it is.