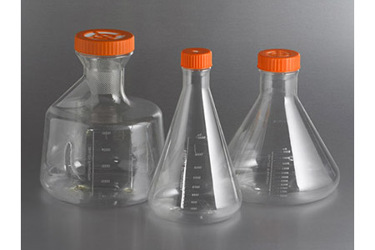 HEK-293F is a variant of the HEK-293 cell line that has been adapted for suspension growth. As the HEK-293F expression system permits the transfection of large volumes of cells, demonstrates high transfection efficiencies, and eliminates the need for changing media, many laboratories use this suspension cell culture system for generating large amounts of mammalian recombinant proteins.

Corning disposable Erlenmeyer flasks are ideal for the storage and applications of shaker cultures. The Corning 5L Erlenmeyer flask features a large vent cap that enables the scale-up of suspension cell cultures by providing continuous gas exchange while ensuring sterility and preventing leaks. Corning 5L Erlenmeyer flasks are also space-efficient and provide an ideal choice for culturing large quantities of cells. These flasks are available in PC or PETG with plain bottom or baffled bottom designs, thus offering different choices according to specific cell lines.