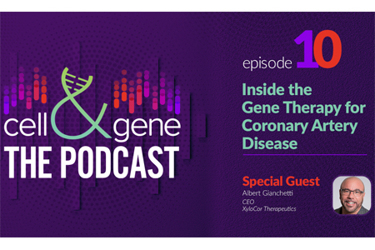 According to the Mayo Clinic, because coronary artery disease (CAD) often develops over decades, people might not notice a problem until they have a significant blockage or a heart attack. Although several conventional small-molecule treatments are available for common cardiovascular problems, gene therapy is a potential treatment option for acquired and inherited cardiovascular diseases that remain with unmet clinical needs. Indeed, gene therapy is a promising modality for the treatment of inherited and acquired cardiovascular diseases.

I had the opportunity to talk to XyloCor Therapeutics’ CEO Albert Gianchetti on Cell & Gene: The Podcast about the biopharmaceutical company’s development of novel gene therapy for unmet needs in advanced coronary artery disease. XyloCor’s lead gene therapy candidate, XC001, is a vehicle to stimulate and augment the native tissue revascularization mechanisms specifically targeting individuals who have demonstrated an inadequate endogenous self-revascularization response to ischemia. By building upon these naturally occurring biologic pathways, the company has been able to demonstrate that XC001 and its prototype formulations are capable of robustly enhancing the blood supply to ischemic tissues in animal models and in clinical testing.

During the episode, Gianchetti details XyloCor’s EXACT clinical trial, which is a Phase 1/2 multicenter, open-label, single arm, dose escalation trial. He talks through the trial and how gene therapy specifically works in this trial. XyloCor also has a secondary product, XC002, in discovery stage, for patients with cardiac tissue damage from heart attacks. He explains this trial and its roadmap as well.

Gene therapy isn’t the only option in trial for treatment of heart disease. Cell therapies for heart disease have been long in development. Earlier this year, I caught up with Peter Altman, PhD, CEO at BioCardia to learn more about CardiAMP Heart Failure Trial and its best possible outcomes for patients.

Alman explained that CardiAMP cell therapy is different from other medications in that available data to date shows that patients improve in their heart function, quality of life, and exercise tolerance after treatment. All other therapies that we know of only slow the progression of the chronic disease, where patients using those therapies deteriorate more slowly than a control group, but do not show improvement in their symptoms. Outcomes from the CardiAMP Phase II TAC-HFT Trial1,2 and the Phase III CardiAMP Heart Failure Trial roll-in cohort3 were comparable, and for some endpoints, superior to those seen in pivotal trials for cardiac resynchronization therapy, an approved implantable electrical pacing therapy for the same patients.

The investigational CardiAMP cell therapy for heart failure has also been designed differently from other cardiac cell therapies based on learnings from trials that have come before it in the areas of mechanism of action, patient selection, dosing and delivery.

CardiAMP cells do not turn into heart cells, which we view as a significant advantage in that the creation of new heart cells present risks to patients that have not yet been solved.  For years, researchers have been focused on creating new heart cells by either directly transplanting them or inducing the growth of new myocardium.  Rhythm abnormalities and rejection of these cells by the immune system remain significant challenges with this approach.

Rather than focusing on creating new myocardium, the CardiAMP mechanism of action hypothesis is based on observations that transplanted cells secrete stimulatory cytokines that instigate an innate regenerative response from resident stem cells. In other words, the cells may promote the heart’s natural healing response. Earlier cell therapies have been shown to provide paracrine mediators that promote a number of valuable mechanisms of action, including survival, contractility, neovascularization, differentiation and remodeling.