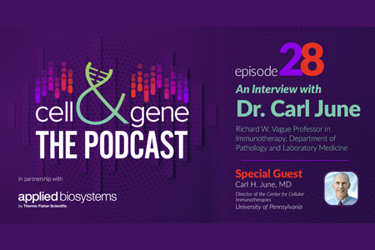 In case you missed it, we have featured some of the cell and gene therapy sector’s best and brightest luminaries on Cell & Gene: The Podcast to discuss everything from the future of CAR-T therapy to stem cell-derived treatment for Type 1 diabetes to best practices in partnering with a CDMO. Here’s a look back at August’s episodes.

An Interview With Dr. Carl June

Dr. Carl June is the Richard W. Vague Professor in Immunotherapy in the department of Pathology and Laboratory Medicine in the University of Pennsylvania’s Perelman School of Medicine and director of the Center for Cellular Immunotherapies in the Abramson Cancer Center and director of the Parker Institute for Cancer Immunotherapy at Penn. He is an HIV gene therapy pioneer and is often referred to as the Father of CAR T cell therapy, and for good reason. In 2012, he helped treat Emily Whitehead, the first child to receive CAR T-cell therapy on an experimental basis. The therapy put Emily's acute lymphoblastic leukemia (ALL) into remission. TIME magazine included Dr. June in the 2018 TIME 100, its annual list of the 100 most influential people in the world. And, most recently, the Tribeca Film Festival debuted the documentary, "Of Medicine and Miracles” about the journey of Dr. June and a team of doctors along with Emily Whitehead and her family who came together on the leading edge of a cancer cure.

During the episode, Dr. June and I discuss the groundwork for immunotherapy, which began in 2003 with the mapping of the human genome. Dr. June is one of the pioneers of CAR-T cell therapy, and today, Penn Medicine’s world-leading researchers are developing new immunotherapies to treat cancer, as well as other diseases, including MS, Parkinson’s, Alzheimer’s, infectious diseases, and more. He answers my questions about what he and his team are working on from an immunotherapy perspective as well as the short-term plans for advancing CAR-T cell therapy.

Best Practices for Partnering with a CDMO

Episode 29 of Cell & Gene: The Podcast featured my conversation with Emily Moran, VP of Vector Manufacturing and Avi Nandi, VP of Process Development at the Center for Breakthrough Medicines share key considerations for biotechs looking to partner with a CDMO. During this episode, we educated biotechs on how to reduce risk, lower costs, and how to better manage expectations when it comes the biotech / CDMO relationship.

A Stem Cell-Derived Treatment For T1D

Sernova Corp. is a clinical-stage regenerative therapies company currently focused on insulin-dependent diabetes. On Episode 30, CEO and President, Philip Toleikis, Ph.D., and I talked through the company's on-going clinical trial to treat Type 1 diabetes (T1D) as well as the very real potential to progress from simply masking symptoms to having a functional cure for T1D. Toleikis also provided his take on the near-term future of regenerative medicine. The company is about to enter the clinic with two additional programs - an implantable cell therapy for benign thyroid disease resulting from thyroid gland removal anticipated to enter the clinic early 2023, and an ex-vivo lentiviral factor 8 gene therapy for hemophilia A. He and I discussed the vision and desired outcomes for both trials.

Episode 31, which drops on Thursday, September 1st, features my conversation with Novartis Gene Therapies’ President, Chris Fox. There are 20+ gene therapy targets in Novartis Gene Therapies’ pipeline, and the company’s initial gene therapy, Zolgensma, for spinal muscular atrophy (SMA) has been approved in more than 40 regions and countries and has been used to treat more than 2,300 patients worldwide. Fox and I discuss what’s next for the gene therapy giant as well as overcoming commercialization challenges in a sector that races against a highly regulated clock to bring life-saving therapies to the patients who need them.

Cell & Gene: The Podcast has exciting and brilliant guests lined up, so be sure to subscribe and download wherever you get your podcasts.