Where Is Technological Innovation Needed For CAR-T Manufacturing?

Investment in cell therapy biomanufacturing has continued to follow a steady upward trend.  According to BioPlan’s 2021 Annual Report of Biopharmaceutical Manufacturing,1 the production capacity for cell therapy is expected to increase 29.4% this year, similar to what was seen in 2019 and 2018. Furthermore, cell therapy is expected to expand further in the next five years, with capacity increases of 29.2% and 31.0% anticipated for biomanufacturers and CMOs, respectively. 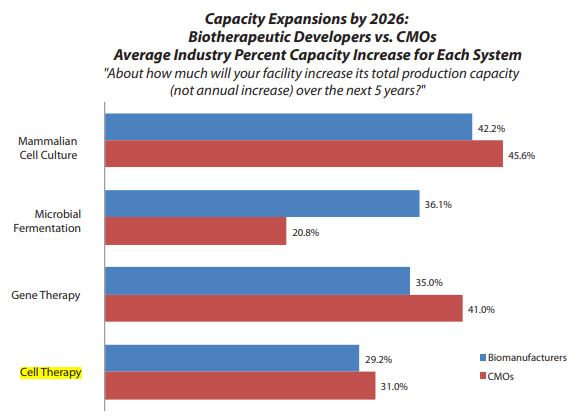 Even with the anticipated increases in capacity, there are still concerns facing current and future cell therapy manufacturing capacities, including an anticipated “capacity crunch” similar to the crunch in mainstream bioprocessing that was feared but largely avoided in the early 2000s. This needed ramping up of capacity is also taking place while the COVID-19 pandemic is occurring, complicating supply chain timelines. Innovation will largely be needed to further improve manufacturing processes in cell therapy and CAR-T manufacturing to meet demand in the coming years.

In this year’s 2021 Annual Report of Biopharmaceutical Manufacturing, respondents were asked what facilities they were currently testing/evaluating to potentially add to their production workflows within the next year. Over 40% of respondents indicated that upstream manufacturing technology is one of the leading systems to be evaluated/tested within the next year. This is especially important to increasing production of the target product in cell therapy and CAR-T, due to the limitations in downstream processing and step recovery enhancements.

CAR-T has some key potential areas of improvement for upstream manufacturing to help alleviate some of the anticipated increases in demand. These include:

These two technologies have the potential to improve efficiencies in the manufacturing process, helping to alleviate some of the anticipated strain in the coming years.

The main cell separation technology currently being utilized in the field of CAR-T manufacturing is magnetic cell separation, which works by using magnetic particles and antibody interactions to bind with the surface markers of the targeted cells. These targeted cells can then be isolated from the rest of the sample. This can be done in both positive and negative approaches.

There are several advantages to magnetic separation technology that make it particularly well-suited for CAR-T manufacturing. It is relatively fast when compared to other more traditional cell sorting technologies like fluorescence-activated cell sorting. This allows a high volume of cells to be sorted in a relatively short amount of time. Furthermore, it can be scaled up according to need and throughput and can be used in a versatile manner to adapt to a variety of protocols. However, there are some negatives surrounding it that need improvement. The upscaling, while simple, can be laborious and expensive. The materials needed can add up over time, and this is further exacerbated as throughput is increased. The most significant disadvantage surrounding magnetic separation technology for manufacturing of CAR-T therapies is the low viability seen when separating delicate cell populations. The magnetic fields and the beads themselves can cause damage to weak or unhealthy cell populations. This makes sorting cell populations from patients who have undergone multiple prior treatments extremely difficult and results in a low percentage of viable cells at the end of the process.

Magnetic separation can be improved by addressing the damage caused by the magnetic beads, such as through additional steps or media that help to mitigate the stress put on the cells. Another solution is to introduce an entirely new solution for cell separation when manufacturing CAR-T therapies. Some examples of alternative cell separation technologies include buoyancy-activated cell sorting technology and biocompatible dissolvable polymers.

Buoyancy-Activated Cell Sorting – This technique uses microbubbles to isolate the target cells. The microbubbles are used in place of the magnetic beads from magnetic separation to bind specifically to the desired cells via the interaction between cell markers and antibodies. This binding will increase the buoyancy of the cells, creating a clear separation between the targeted cells of interest and the rest of the cell population. These target cells can now be collected with high efficiency and viability. This technique represents a gentler method for cell separation that can be used with delicate cells.

Biocompatible Dissolvable Polymers – This technique uses a hydrogel that can be customized according to a variety of cell capture agents, such as antibodies, to help target cells. The target cells can then be released after capture via the specific cell release buffer.

While both of these options have not been developed for commercial-scale applications, they represent alternatives to magnetic separation that are gentler than using magnetic beads. This allows both to be potentially more effective than magnetic separation when handling fragile cell types. By improving the options afforded to scientists for cell separation, the therapies produced will be more robust.

Another area where alternative technology could improve upstream efficiencies in the CAR-T manufacturing workflow is with transfection/transduction. Improving efficiency at this stage could yield a variety of benefits for manufacturers:

One potential example of an alternative technology to lentiviral and electroporation is Kytopen’s Flowfect technology. By using continuous fluid flows and electric fields, manufacturers can transfect cells in a manner that is less harmful to cells than traditional electroporation. Furthermore, the technique is non-viral, alleviating manufacturing concerns with traditional viral methods. If optimized for CAR-T therapies, this would provide a viable alternative for scaling up the manufacturing for CAR-T therapies.

Improvements need to be made throughout the CAR-T manufacturing process to meet the future demand for therapies. By investing in improvements in upstream processing of cells, the process can be readied for the anticipated increases in capacity needed.

David Lin is the senior director, technical research, BioPlan Associates. With a master’s in molecular biology, he has experience with biopharmaceutical and pharmaceutical life science research, including a diverse science and marketing background. Specializing in content creation and market research, he was formerly with BioInformatics Inc. and GenScript. He can be reached at dlin@bioplanassociates.com, +1 301-921-5979, or www.bioplanassociates.com.