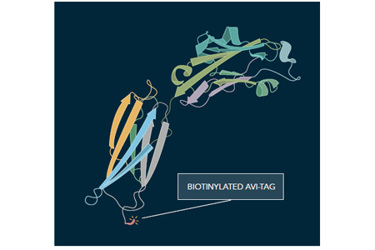 Surface plasmon resonance (SPR) is a powerful, accurate, and direct way to measure protein interactions in real-time without the need for antibodies or detection reagents. Typically, a protein is covalently immobilized or non-covalently captured on a sensor chip, then an analyte is passed over the surface at varying concentrations and allowed to associate with the protein ligand. These binding events are detected by measuring changes in the refractive index caused by an increase of mass near the sensor chip surface. Biacore (GE Healthcare) is the most widely used SPR system and is currently used for all SPR experiments at R&D Systems. In a typical Biacore experiment, the covalently immobilized protein is often coupled to the sensor chip in a random orientation by amine or thiol coupling. This works well in many cases, however these random thiol or amine immobilization methods can produce unsatisfactory results, especially with small proteins or proteins with reactive groups in the binding interface resulting in valuable time spent troubleshooting. In this study, we employ R&D Systems Avi-tag Biotinylated Proteins along with streptavidin Series S chips to specifically and uniformly capture proteins in a Biacore experiment, as an alternative to chemical or amine coupling.