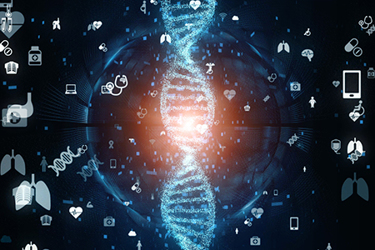 Decades in the making, gene therapy is now on the verge of providing potentially curative treatments for a wide range of disorders. With a single injection, it has the potential to address the underlying cause of disease, altering the lives of patients who would otherwise face extremely challenging prognoses.

REGENXBIO has been a pivotal force in driving the scientific innovation that is advancing gene therapy. We are developing gene therapy programs for rare and chronic conditions, and we have played a central role in restoring industry interest and trust in gene therapy through the introduction of our proprietary AAV vectors, known as the NAV® Technology Platform. ZOLGENSMA uses our AAV9 NAV vector, which Novartis licensed from us for the treatment of SMA, and there are more than twenty programs in development from companies that have licenses for the use of NAV vectors. We, and our licensee partners, are using this platform to develop potentially best-in-class gene therapy candidates for a wide range of disease targets.

Among these prospective treatments are those that address the unmet neurological symptoms of rare diseases, such as severe genetic lysosomal storage disorders. REGENXBIO currently has programs in three of these disorders, including Hunter syndrome, or Mucopolysaccharidosis Type II (MPS II), which affects about 1 in 100,000 to 170,000 newborn males.

A Rare Disease in Need of Better Treatments

MPS II is caused by mutations in the gene that is responsible for making iduronate-2-sulfatase (I2S), an enzyme that helps break down cellular waste products known as polysaccharides, or glycosaminoglycans (GAGs). As they build up in tissues, GAGs cause progressive degeneration in multiple organs, including the brain.

In severe forms of MPS II, early developmental delays become apparent by 18 to 24 months of age. Cognitive and adaptive development begins to plateau around four years old, with progressive deterioration afterwards. By the time of death, most MPS II patients with CNS involvement are severely mentally affected and require constant care.

Patients with MPS II are often treated with intravenous enzyme replacement therapy (ERT), to address the accumulation of cellular waste products. ERT requires lifelong weekly infusions, which can take hours, creating a major burden for patients and their caregivers. Many families are forced to relocate and change working schedules to obtain treatment. Moreover, ERT does not address the underlying cause of the disease and is not able to reach the brain, limiting the effectiveness for patients with severe cognitive symptoms. Given the limitations of current treatments for MPS II, a successful gene therapy providing CNS benefit would represent a dramatic advance in treatment paradigm.

We are currently conducting a clinical program to explore the effects of an investigational, one-time gene therapy that specifically addresses the neurological manifestations of MPS II. RGX-121 is designed to use the AAV9 vector to deliver the IDS gene encoding the I2S enzyme. Using an image-guided procedure, we aim to deliver the gene therapy through the back of the neck into the cerebrospinal fluid (CSF) that bathes the brain. Delivery of the gene therapy and expression of the enzyme that is deficient within cells in the CNS could provide a permanent source of secreted I2S, potentially preventing the progressive cognitive decline that otherwise occur in MPS II patients.

We are at an exciting juncture in our MPS II program. Our most recent data suggests the potential of RGX-121 to restore biological enzyme activity and improve outcomes for MPS II patients. After treating eight patients in two different dose cohorts, we saw that the treatment was well-tolerated, with no drug-related serious adverse events. In both cohorts, we have seen evidence of enzyme activity in the CNS, including consistent reductions in biomarkers in the CSF up to two years after administration of RGX-121. In addition, patients have demonstrated continued neurocognitive development as measured by the Bayley Scales of Infant and Toddler Development, 3rd Edition (BSID-III) up to two years after RGX-121 administration. Furthermore, some patients in the study were not currently receiving ERT and demonstrated increases of I2S enzyme concentrations in plasma and enzyme activity in urine following RGX-121 administration to the CNS.

Based on these early but encouraging results, we plan to initiate a third cohort of patients at a higher dose to better understand the potential treatment effects of RGX-121.

We first began studying RGX-121 in patients under the age of five years old, but older patients may also derive benefit from RGX-121. As a result, we have started a new study in 5–18-year-old patients with severe MPS II in order to understand how older pediatric patients respond to RGX-121. In this patient population of older children, we will examine the impact that RGX-121 may have on preserving cognitive function. As in our current trial for children with MPS II under five years of age, we will evaluate the safety of a single administration of RGX-121 and changes in biomarkers which may indicate I2S enzyme activity as well as changes in cognitive function, adaptive behavior, daily function and quality of life.

Additionally, a common challenge in developing treatments for rare disease is the collection of natural history data, especially from very young children.  It is critical to the development of therapies to strengthen the existing body of natural history data, and to that end, we are starting a prospective observational study designed to provide detailed characterization of neurocognitive development and key biomarkers in patients with severe MPS II. This study is designed to prospectively document the changes in neurodevelopmental parameters of cognitive, behavioral and adaptive function over time, in addition to CNS imaging and biomarker activity. Our hope is that this will illuminate the treatment outcomes that would be important and impactful for patients. We look forward to sharing the data from this observational study with the patient community to continue to advance the knowledge about this disease.

While it’s still relatively early, data collected from these trials as well as our gene therapy programs for the treatment of other rare lysosomal storage diseases have the potential to broaden our understanding of AAV gene therapy in the CNS.

Ultimately, gene therapy is designed to address the underlying cause of disease, and a single-dose treatment with long-lasting results has the potential to greatly expand treatment options for rare disease patients. It could also lead to potentially curative results, which could significantly reduce the burden of chronic conditions and lay the groundwork for a transformed patient experience and healthcare system.