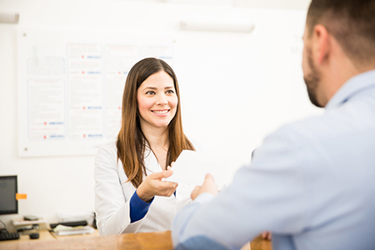 The use of CT scans is an effective diagnostic method to assess internal organs and disease status, as well as the effect of treatment in cancer patients. CT scans, with or without contrast, are regularly used to identify swollen lymph nodes, spleen and tumors in leukemia and lymphoma patients at initial presentation and at multiple subsequent timepoints as part of follow up.

CT scans use ionizing radiation to image internal organs based on their density. CT imaging is often used to detect changes in lymph node or lesion size in order to assess the effect of treatments during clinical trials. While the exposure to ionizing radiation is minimal from each CT scan, radiation exposure is cumulative. Excessive radiation exposure can have a negative effect on a patient’s genes and chromosomes (the so-called genome), potentially damaging DNA by breaking molecular bonds and inducing errors in cell replication or gene expression. A gene named TP53 functions to identify cells that have undergone damaging and irreparable breaks in DNA bonds and other errors, but this gene itself can also be damaged.

The TP53 gene provides instructions for making a protein called tumor protein p53. This protein acts as a tumor suppressor, which means that it regulates cell division and survival by keeping DNA-damaged cells from growing and dividing (proliferating) too fast or in an uncontrolled way (medlineplus.gov). If a patient has a TP53 mutation, the gene may not be able to control the growth of damaged and potentially malignant cells. Uncontrolled growth of damaged cells may lead to cancer. A TP53 mutation can be inherited from parents or acquired later in life from environmental injury or from a mistake that happens in the body during cell division (medlineplus.gov).

The effect of ionizing radiation on the p53 gene may result in its mutation, which contributes to the “persistent damage response, which could in turn drive the process of cancer development as high levels of mutant p53 can act as an oncoprotein to drive invasion and metastasis.” This phenomenon has been studied extensively in mice and fish. (Reference: “Ionizing radiation induces a dramatic persistence of p53 protein accumulation and DNA damage signaling in mutant p53 zebra fish” by L. Guo, H.P. Liew, S. Camus, A.M. Goh, L.L. Chee, D.P. Lunny, E.B. Lane, D.P. Lane.) The UN Scientific Committee study on the Effects of Atomic Radiation also discusses the effect of radiation on TP53 in animals in their 2006 Report Vol. II, Scientific American: pages 12/13, Sec. c17. Another related study on subject entitled, “Radiation and the Risk of Chronic Lymphocytic and other Leukemias among Chernobyl Cleanup Workers” by Lydia B. Zablotska and other Russian researchers was published in November 2012 by the National Institutes of Health, U.S. Department of Health and Human Services.

Based on my research, there are no prospective studies on the effect of ionizing radiation from CT scans on humans. Who would sign up for a trial and risk ionizing radiation exposure to determine its genetic effects? The fact is the data are already available from patients in clinical trials. Most blood cancer patients in a clinical trial are required to undergo baseline and periodic CT scans. They are also likely to have serial genetic testing by fluorescence in situ hybridization (FISH) for del(17p) (the chromosomal area where the TP53 gene is located) and sequencing for TP53 somatic mutations using new technologies referred to collectively as next-generation sequencing. These data could be collected and studied. Blood cancer hematology/oncology specialists will tell you that their patients can progress and convert to more aggressive forms of leukemia or lymphoma without clear reasons. Perhaps TP53 mutation/deletion resulting from excessive cumulative exposure to ionizing radiation (CT scans) is involved. Reference a paper on this topic on the CLL Society website entitled, “The Risk of Secondary Cancer Associated with >8 CT Scans in Patients with NHL (Non-Hodgkins Lymphoma).”

I have chronic lymphocytic leukemia (CLL) and am currently in a clinical trial on LOXO-305 (pirtobrutinib), an oral non-covalent kinase inhibitor. This is my fourth clinical trial after having been diagnosed with CLL in 2002, including three relapses following various treatments and multiple CT scans. The LOXO trial includes the usual baseline workup including blood labs, EKG, bone marrow biopsy and full body CT scans with contrast. I agreed to that in the trial document and to a six-month follow-up set of CT scans even though I am responding well to the drug without any palpable lymph nodes. Several patients in this trial with more active disease are required to undergo more frequent CT scans which may be excessive for reasons described above.

During the past nine years and four clinical trials, I have had 20 CT scans (chest, abdomen, pelvis, neck). Using the CT risk calculator [http: www.xrayrisk.com/calculator/calculator-normal-studies.php] at effective dose per scan of 21.0 mSv, I have received about 420 mSv. According to this calculator, my increased cancer risk from just CT scans is 1.22% or about 1 in 82. This seems small but it is not zero. I do know that my TP53 gene has mutated progressively during this time period.

“There is no need for the most precise reads of lymph nodes or spleen size by using all these CT scans. Magnetic resonance imaging (MRI) can give good enough details to say whether nodes are growing and shrinking. The trend is what is needed,” says Dr. Brian Koffman, CLL Society Chief Medical Officer. “Additionally, there is a decreasing importance of complete remission (CR) from CLL treatments defined by all lymph nodes <1.5 cm and the ascendancy of minimal residual disease (MRD) testing in many (not all) clinical settings.”

A team of researchers at Stanford University School of Medicine including Won Hee Lee, PhD, Young Fuga, PhD, Joseph Wu, MD and Patricia Nguyen, MD, presented a report in 2015 entitled, “DNA damage seen in patients undergoing CT scanning.” Patricia Nguyen stated, “We now know that even exposure to small amounts of radiation from computed tomography scanning is associated with cellular damage. Whether or not this causes cancer or any negative effect to the patient is still not clear, but these results should encourage physicians toward adhering to dose-reduction strategies. We need to learn more because it’s not a benign effect, even at these low dosages.”

The FDA requires biopharma companies to implement a rigorous investigation of the effects of any new drug treatment before final approval, which can take years. Biopharma companies have few choices but to provide the required data per FDA criteria, which include CT scan data, to gain approval for their drug. But they do have choices. Although somewhat more expensive, MRI scans could be substituted for CT scans to gather the same clinical trial data unless imaging of lung lesions is necessary, in which case a low-dose chest CT scan should be adequate. MRD testing could also be utilized as a clinical trial endpoint. Until excessive and cumulative exposure to ionizing radiation from CT scans can be eliminated as a cause of acquired TP53 mutation and cancer progression, I propose that the FDA permit biopharma companies to utilize MRI scans and/or MRD testing as alternatives to CT scans for clinical trial patients to assess the effectiveness of new therapies.