Is A Rapid Cooling Step Needed When Freezing Cells For Cryopreservation? 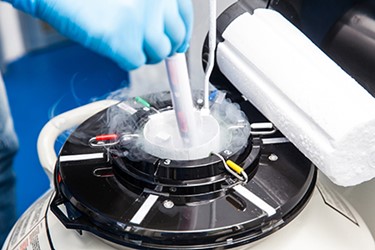 Successful cell cryopreservation requires a controlled cooling rate. Cooling too rapidly or too slowly will lead to a poorer outcome. This is true because of the physical environment cells experience during cryopreservation. As ice forms in the extracellular solution, pure water is locked away as ice. As a result, cells are suspended in an increasingly concentrated solution, which dehydrates them. Cooling too slowly makes this solution toxic; cooling too rapidly prevents cells from dehydrating sufficiently, and intracellular ice forms.

Controlled-rate freezers, such as the electric-powered VIA Freeze series or liquid nitrogen (LN2)-based freezers, are often programmed for linear cooling. A subset of researchers using LN2-based freezers prefer to interrupt the linear cooling to include a “rapid-cooling nucleation step,” which they believe is needed for successful cryopreservation. This step is hypothesized to improve ice nucleation – an important event for good post-thaw outcomes. A typical cooling profile for linear cooling with a rapid-cooling nucleation step is shown in Figure 1.