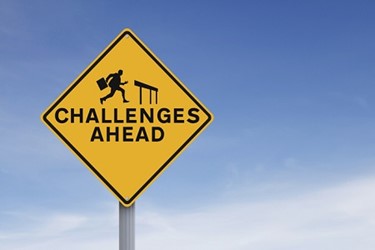 Innovation in gene therapy brings the potential for transforming patient care and obviating the need for chronic therapy through single-dose cures. Despite the potential long-term benefits of this new therapeutic modality, gene therapy companies face a number of underappreciated challenges.

While there have been recent curative achievements in hepatitis C virus, curative small molecule or biologic therapies are uncommon. After three decades of hopes tempered by setbacks, gene therapy (the process of transferring exogenous protein-coding nucleic acids into cells to ameliorate a disease state through restoration or augmentation of host gene function) is poised to make curative1 therapies a routine approach for managing diseases.

Gene therapies, including both in vivo (i.e., intravenous administration of a viral vector carrying a gene for a missing or faulty protein) and ex vivo (i.e., genetic manipulation of harvested cells before administering them to the patient) approaches (see Figure 1), are starting to reach the market with pronounced, long-term impact after a single administration. The FDA recently approved Novartis’ CAR T-cell therapy2, Kymriah, followed closely by Gilead’s CAR T-cell therapy, Yescarta, for hematology oncology conditions. At the end of 2017, Spark Therapeutics’ Luxturna, indicated for the treatment of an inherited form of vision loss, became the first in vivo gene therapy approved in the U.S. Further, gene therapy assets from AveXis for spinal muscular atrophy, BioMarin for hemophilia A, and Nightstar for choroideremia, among others, have advanced to pivotal trials (or have been filed for approval) after demonstrating attractive earlier-stage data. 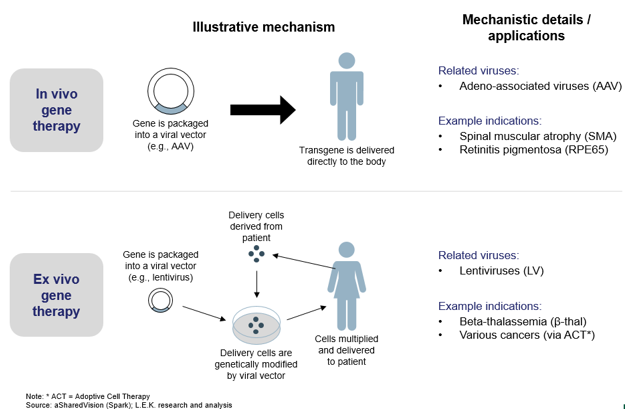 This momentum, coupled with scientific, clinical, and manufacturing advances, suggests gene therapy will play an important role in managing diseases driven by specific genetic mutations. However, this new treatment paradigm will challenge biopharmaceutical companies to evolve their traditional business models to better serve patients, providers, and payers with this complex, novel therapeutic model. 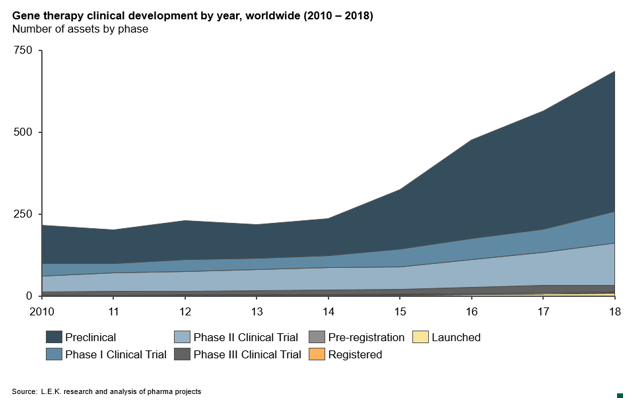 The fundamental value proposition of gene therapy is long-term efficacy with a single-dose treatment. This novel treatment approach introduces a number of unique challenges for gene therapy companies.

The achievement of a functional cure or the generation of antibodies against a delivery vehicle (e.g., a virus) is expected to limit gene therapies to a single dose per patient. An inability to re-treat would lead gene therapies to deplete their addressable prevalent populations (see Figure 3). As the number of treated patients accumulates, the number of potential patients who could be treated in a given year is reduced. This leads to demand that peaks early before steadily declining. Once the prevalent population is depleted, demand for a gene therapy would be driven by incident patients. 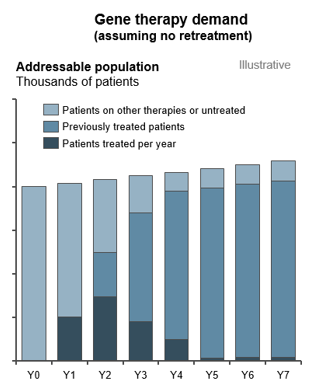 Price points for recently launched gene therapies have fallen short of expectations. For example, prior to the launch of Kymriah, industry participants projected a price of $600,000 to $750,000 per patient. However, the actual price of Kymriah at launch was $475,000 per acute lymphoblastic leukemia patient. Spark’s Luxturna, which was able to achieve a relatively high price of $850,000 for the treatment of both eyes, fell short of the $1 million+ price point expected by the market.

Payers are hesitant to pay high up-front costs for these therapies. This is partly due to the fact that curative therapies do not yet have a long-term track record of sustained efficacy. Under one-time payment models, there is a profound misalignment of short-term costs of gene therapy that would be borne by payers and long-term benefits accrued by patients. Payers are often hesitant to entertain one-time payments that are more than threefold to fivefold the cost of the existing standard of care. Furthermore, they are concerned with having to pay up front for a treatment that would provide benefits to a patient beyond his stay on their plan (typically less than five years).

The “bolus-like” revenue curve associated with a first gene therapy presents a challenge to achieving sustainable growth given the lack of a stable base from which to build. Revenue will wane naturally as the addressable population is depleted a few years after launch. The short duration of meaningful revenue contributions from a single gene therapy product suggests the timing of life cycle management efforts and other product launches is critical.

Achieving growth would require launching another revenue stream (e.g., another gene therapy product) before the revenue of the first gene therapy starts to wane. This would lead to a situation in which the revenue peaks overlap, potentially resulting in substantial growth. However, maintaining growth would require launching a product every few years. Beyond the question of whether a biotech company would have the portfolio breadth or resources to launch several products within a few years of each other, it would be challenging to optimally time the launches of subsequent gene therapies.

As the gene therapy landscape continues to mature, biopharmaceutical companies need to make a number of strategic choices to drive success, given the commercial challenges articulated above.

As discussed, the nature of the addressable population for a given indication can have profound implications for the future demand for a gene therapy. Indications driven by incident populations are expected to lead to more-stable demand, while those driven by prevalent populations could see declining demand after an initial peak. Today, this mainly presents a choice between oncology and nononcology indications. Given the short survival spans for patients with advanced and metastatic cancer, the addressable population is driven by the annual incidents of patients. With the exception of a limited set of indications that are fatal a few years after diagnosis (e.g., spinal muscular atrophy type 1), nononcology indications tend to be driven by prevalent populations.

Within nononcology indications, gene therapy companies need to decide whether to pursue monogenic conditions, which tend to be rare, or broader conditions driven by a number of mutations or by unclear etiology. Given the technical considerations, gene therapy efforts are currently centered on monogenic conditions. However, novel platforms or competitive intensity could push gene therapy companies to consider diseases with bigger addressable populations despite higher technical hurdles.

There is no right answer on the appropriate mix of indications for a company to consider. However, it is critical to understand the potential downstream implications of pursuing different types of indications, as well as the existing and emerging competitive environment. Ultimately, biotech companies should pursue indications for which they feel they have a competitive advantage relative to other players in the space.

Most biotech companies focused on gene therapy are formed around a specific technology platform (e.g., novel viral capsid that could have preferential uptake in an organ system). Most then proceed to de-risk the technology as quickly as possible by applying it to low-hanging-fruit indications. However, the main common characteristic across selected indications is often the underlying technology platform that gave rise to the gene therapy candidates. This concentrates risk on the technology platform and exposes the company to a negative event that has a deleterious effect across the whole portfolio. Early-stage gene therapy companies often do not have a choice regarding this risk; however, once the founding technology begins to have traction, executives will often pursue adjacent or orthogonal platforms that diversify risk and maximize opportunities for the company.

Gene therapy companies may choose to develop different viral delivery vectors or technologies for ex vivo and in vivo applications. However, it is often difficult to know when to diversify away from the founding technology platform. Further, it is challenging to balance spend levels across founding and new platforms and to decide whether to develop new technologies in-house or access them from external sources. Importantly, strategic choices around technologies should dovetail with strategic choices about indication mix to ensure consistent direction for the future.

Gene therapies represent a departure from the traditional biopharma business model. As reviewed above, they have the potential to introduce misalignments between long-term benefits to patients and short-term costs to payers. Resolving this misalignment is undoubtedly one of the greatest challenges facing gene therapy. While a number of industry efforts have begun (e.g., Alliance for Regenerative Medicine; discussion among Express Scripts, BioMarin, and Spark), it is unclear what the optimal gene therapy reimbursement model will be or whether individual models will emerge for specific indications, gene therapy situations, or geographies.

Regardless, gene therapy companies need to make a number of choices related to novel reimbursement models. First, do they want to pursue such models for their therapies? Second, how much of a leader do they want to be in the development of these business models? Third, when is the right time to engage the appropriate stakeholders? It is in the best interest of gene therapy companies to be engaged in relevant discussions as early as possible to ensure beneficial outcomes.

A number of leading gene therapy biotech companies have built out most, if not all, of their infrastructure. This is most evident in manufacturing, where companies such as BioMarin and AveXis have made significant investments in internal manufacturing capacity. These decisions were driven by a combination of the lack of external expertise and a desire to protect intellectual property and trade secrets. However, as we have seen before for small molecule therapies and antibodies, external manufacturing capacity will likely play a key role in supporting the gene therapy industry as contract development and manufacturing organization offerings mature. A number of players (e.g., Brammer [Thermo], Paragon [Catalent]) have started to invest significantly in this area. Ultimately, a combination of factors including portfolio breadth, uniqueness of the technology, and availability of quality external manufacturing supply will determine the optimal path for a given gene therapy company.

Further, given the potential impact of waning demand on the utilization of commercial and medical personnel, gene therapy companies may choose to outsource these capabilities. This dynamic has not yet started to play out and perhaps will be considered as more gene therapies start to reach the market.

Technological advancements are making a way for gene therapies to deliver long-term benefits to patients with a single dose. This dynamic is expected to introduce a number of issues that will challenge the existing biopharma model, given short-lived demand curves and misalignments between short-term costs of gene therapy and long-term benefits to patients. Addressing the strategic choices behind these challenges will be critical for the sustainability of gene therapy business models.

Ricardo Brau is a managing director and partner in L.E.K. Consulting’s Boston office. He focuses on the biopharmaceutical and life sciences sector and has experience across most therapeutic areas and industry segments, in both large and emerging biopharma companies. Brau joined the firm in 2008 as a life sciences specialist and advises clients on a range of critical issues, including corporate and business unit strategy, innovation, R&D portfolio management, and commercial planning. He has a B.S. in mechanical engineering, an M.E. in biomedical engineering, and a Ph.D. in bioengineering, all from the Massachusetts Institute of Technology.

Pierre Jacquet is the global head of L.E.K. Consulting’s Life Sciences practice and a managing director and partner in the Boston office. He has more than 20 years of experience in corporate and business unit strategy consulting and in mergers and acquisitions advisory services. Jacquet has led numerous engagements across the biopharma, medtech, and diagnostic sectors, helping companies identify and execute strategies that maximize shareholder value creation. He received his M.B.A. from Darden Graduate School at the University of Virginia. He was also awarded a Ph.D. in biomedical sciences and an M.D. from the University of Liège in Belgium