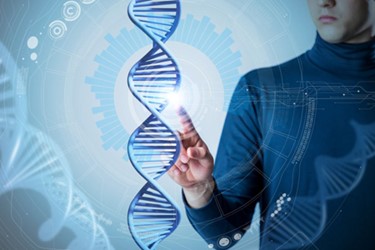 CRISPR-Cas9 is the simplest gene editing technique discovered to date. Based on the adaptive immune system of bacteria and archaea, the CRISPR-Cas9 system uses short RNAs to direct Cas9 nuclease to target DNA sequences. Because it uses RNA rather than a protein to target nuclease activity, CRISPR-Cas9 can be retargeted by simply synthesizing or ordering a new guide RNA (gRNA), which also makes this technique amenable to high order multiplexing. These attributes make CRISPR-Cas9 ideal for introducing mutations in protein-encoding genomic DNA regions, which allows protein function to be studied in its native cellular context.

In this study, we report a novel workflow that incorporates Droplet Digital PCR (ddPCR™), high resolution melt (HRM) analysis, western blotting, and RT-PCR to generate Sanger sequencing validated knockout haploid human cell lines. For this experiment we targeted the BUB1B gene, which encodes a kinase involved in spindle checkpoint function and is implicated in cancer, as the loss or reduced function of the spindle checkpoint has been found in many forms of cancer. The knock out or knock down of genes implicated in cancer is one of the many ways gene editing is being used to further study disease, as it allows researchers to model the effects of different mutations.