The explosion of gene therapy candidates in clinical development is being led by a diverse set of originators, including many hospital and university labs. While these are great incubators for innovation, the many small labs working in isolation do not have experience in commercializing a medicine for wide and sustained use in patients, and this could slow the acceptance of gene therapies for the people who really need them. Health authorities have recognized the importance of getting gene therapies into standard use and are supporting doing so with accelerated pathways.

Although gene therapies are revolutionary in the clinic, they represent an evolution from viral vaccines and other related biopharmaceuticals that have been fully developed for commercial supply. This previous experience provides a huge head start for establishing control strategies (CS) for gene therapies (GTs).

The control strategy framework for GT looks a lot like CS for viral vaccines, but with a seismic shift in the risk balance applied to the critical quality attributes. CMOs are positioned to play a leading role in standardizing CS for GT because so many gene therapy products are funneled through CMOs for commercial scale production.

Gene therapies are developed by startups, hospitals, universities, multinational pharmaceutical corporations, and even patient advocacy groups.[1] Bringing these life-changing products forward through splintered organizations, often with minimal experience in commercial manufacturing, would be slow — heartbreakingly slow for the patients and families hoping and waiting for a treatment. However, the many developers funnel through a much smaller number of manufacturers and CMOs and health authority reviewers depicted in Figure 1. The manufacturers and health authorities have an opportunity to accelerate hope by supporting a technology platform approach to commercialization, with robust control strategy as the foundation. CMOs play an especially important role in gene therapy commercialization, since much of the full-scale production is outsourced to CMOs.[2] 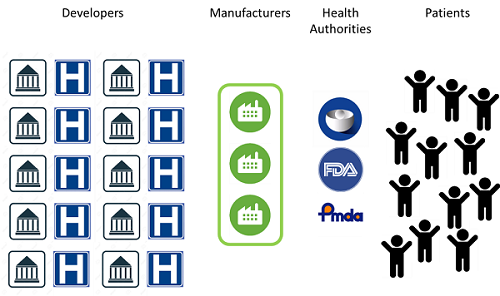 Diseases stemming directly from a defective gene can be life-altering and even deadly. There are more than 10,000 known monogenic (single gene) diseases, occurring in about 10 of every 1,000 births.[3] Other more complex forms of genetic inheritance are also to blame for a wide range of conditions. Many genetic diseases still lack even basic effective treatments.

Inherited retinal diseases can cause vision loss, progressing to complete blindness. On Dec. 19, 2017, the FDA approved a one-time gene therapy treatment (Luxturna, Spark Therapeutics) to improve vision in patients with two inherited retinal diseases.[4] Clinical trials demonstrated efficacy through up to four years from a single dose. Luxturna demonstrates the potential for gene therapy to treat and even cure rare diseases with as few as one treatment.

Attacking genetic diseases at the root by correcting or replacing a defective gene radically transforms the treatment of some terrible conditions. Although gene therapy is a revolutionary clinical advance, manufacturing and testing methods overlap extensively with those used for many years to produce other biopharmaceutical products. In particular, gene therapies delivered by viral vectors use many unit operations and methods commonly employed in viral vaccine manufacture and testing.

Viral vector gene therapy uses a virus as a vehicle to deliver a healthy gene to cells, replacing the gene that is faulty.[6] For example, Luxturna works by delivering a normal copy of a specific gene directly to retinal cells, for individuals whose own gene is mutated. Gene therapies to treat different diseases may be very similar in nearly every way, except that the gene delivered by the viral vector is customized to match each disease target. This natural technology platform invites a standardized, templated approach.

There may be useful parallels in the maturing of monoclonal antibodies from groundbreaking discovery to established technology. Although product-specific knowledge remains proprietary, other aspects of analytical characterization and process control are strikingly common across products. This experience gained across many products from many sponsors was consolidated and summarized in the A-Mab case study.[7] The detailed description of monoclonal antibody production and testing, including a general framework for control strategy, describes the foundation of a platform approach to commercial control. This demonstrated success provides a possible model for sponsors, developers, and regulators of gene therapies.

A simplified schematic of a viral vector gene therapy production process is presented in Figure 2. The first four blocks on the left side of the process flow chart represent upstream steps that generate vector product (drug substance). The four blocks on the right side represent downstream steps that purify the drug substance to prepare it for preparation as a drug product.

The transfection step is highlighted because transfection is not typically included in manufacturing of viral vaccines. This step requires development of controls not previously established for vaccines. But the seven remaining steps are common to many vaccine and other biopharmaceutical production processes and provide an extensive existing body of knowledge, experience, and associated process data. Although the complete process for manufacturing viral vector gene therapies is new, control approaches for most of the component unit operations are already well established.

Control Strategy For A Gene Therapy Platform — The Same But Different

The Risk Balance For Gene Therapies

Introducing a potentially curative treatment for a devastating disease with no current satisfactory therapies requires developers, manufacturers, and health authorities to prioritize speed. The accelerated approval pathways provided for some gene therapies acknowledge this. However, the serious patient experiences that occurred during the early years of gene therapy clinical testing demand an unrelenting focus on safety.

This risk evaluation is worlds apart from that for prophylactic vaccines for childhood diseases such as measles, mumps, and rubella. For vaccines administered to otherwise healthy infants, with a target of inoculating nearly 100 percent of children, safety dominates all other priorities. Speed to market is a relatively minor consideration during development compared to safety, long-term supply reliability, and cost.

Existing frameworks for control strategies of viral vaccines and related biopharmaceuticals can be adapted to gene therapy control, with a shift in the risk balance, giving greater weight to speed while maintaining vigorous controls on safety. The prospect of developing gene therapies using a platform technology approach is a perfect fit for delivering novel products as quickly, but also safely, as possible.

CMOs occupy a central position in the commercialization of gene therapies as owners of much of the process experience and expertise. The opportunity to construct a platform approach to control strategy beckons.

Julia O’Neill is a statistician and principal at Tunnell Consulting. She has over 30 years of experience bridging statistics and chemical engineering in vaccines, biologics, pharmaceutical and chemical development and manufacturing. Her current areas of focus include statistical, validation, and regulatory strategy support for a broad range of novel accelerated products, including multiple breakthrough designation and orphan drugs. She has a passion for applying statistical thinking to more rapidly establish the evidence needed to bring forward medicines addressing unmet medical needs. Contact her at Julia.O'Neill@tunnellconsulting.com.

[6]. US Food and Drug Administration Consumer Update “What is Gene Therapy? How Does It Work?”  December 19, 2017, https://www.fda.gov/forconsumers/consumerupdates/ucm589197.htm.