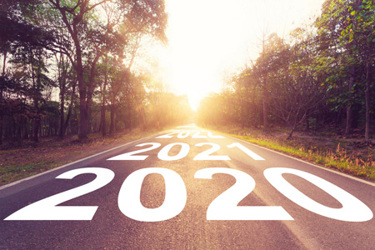 Dendritic Cell-based therapies have emerged as an exciting avenue of cell-based therapy due to their unique function as Antigen Presenting Cells (APCs) and subsequent ability to activate T cells with antitumorigenic effect. Moreover, recent developments in immune checkpoint inhibitors (ICIs), Adoptive T-cell Therapies (ACTs), and human induced Pluripotent Stem Cells (hiPSCs) are also being widely studied and applied. Recently, immune checkpoints have emerged as an effective form of treatment for various cancers, although limitations and severe side-effects have been observed with ACTs. This article reviews DC-based therapies in the context of their associated challenges and proposes a future path for DC-based cellular therapy.

DCs can also elicit cross presentation, i.e. presenting exogenous antigens with MHC Class I there by eliciting both CD4 and CD8 T-cell based immune responses. In addition, DCs provide costimulatory triggers and proinflammatory cytokines, eliciting a complete humoral response to antigens. DCs have a unique ability to transport tumor-specific antigens to lymph node sites in order to initiate tumor-specific T-cell activation such that T-cell immunity is triggered. However, in the microenvironment of cancer cells or tissues, there is limited immune response due to limited DC function, loss of tumor antigens, or high expression of immune suppressive cytokines. Evidence suggests that tumor-derived factors alter or suppress DC activation and antitumor function.

DCs are highly heterogenous in origin, function and response to external stimuli. Human DCs are classified into two major types: Myeloid DCs (mDCs) or Classical DCs (cDCs) and Plasmacytoid DCs (pDCs). Classic DCs (cDCs) are further divided into two major subsets, cDC1 and cDC2, based on the expression of phenotypic markers and ability to elicit CD4 or CD8 T-cell response. Both cDCs and pDCs have been exploited for their ability to invoke antitumor effects. However, cDCs are better antigen presenting cells due to their ability to uptake dead cells and are present in high numbers in humans, while pDCs are of particular interest for their ability to bridge both innate and adaptive immunity but are present in lower numbers. Overall, the potential to use DCs for the differentiation of T-helper subsets and for eliciting antitumor effect holds great promise in dendritic cell-based therapy for various cancers.

Recent clinical studies reveal that existing therapies based on checkpoint inhibitors are limited to cancer patients with a high probability of relapsing into disease state due to cancer resistance.  Therefore, DC based therapy is considered a better approach for modulating the tumor micro-environment such that relevant T-cell responses are triggered. An analysis of the current landscape of ex vivo dendritic cell-based therapy for cancer treatment reveals a plethora of approaches targeting tumor-cell-intrinsic and extrinsic pathways. These range from therapeutic vaccination against cancer cells to reinforcement of the immune system with either autologous or heterologous DCs in order to increase the pathologic complete response and elicit Disease Free Survival (DFS). In the case of Non-Small Cell Lung Cancer (NSCLC) for instance, several new combinatorial therapies are being explored, such as Dendritic cell-based vaccines, vaccines plus chemotherapy, vaccines plus ICIs, vaccines plus chemotherapy and ICIs, among others. 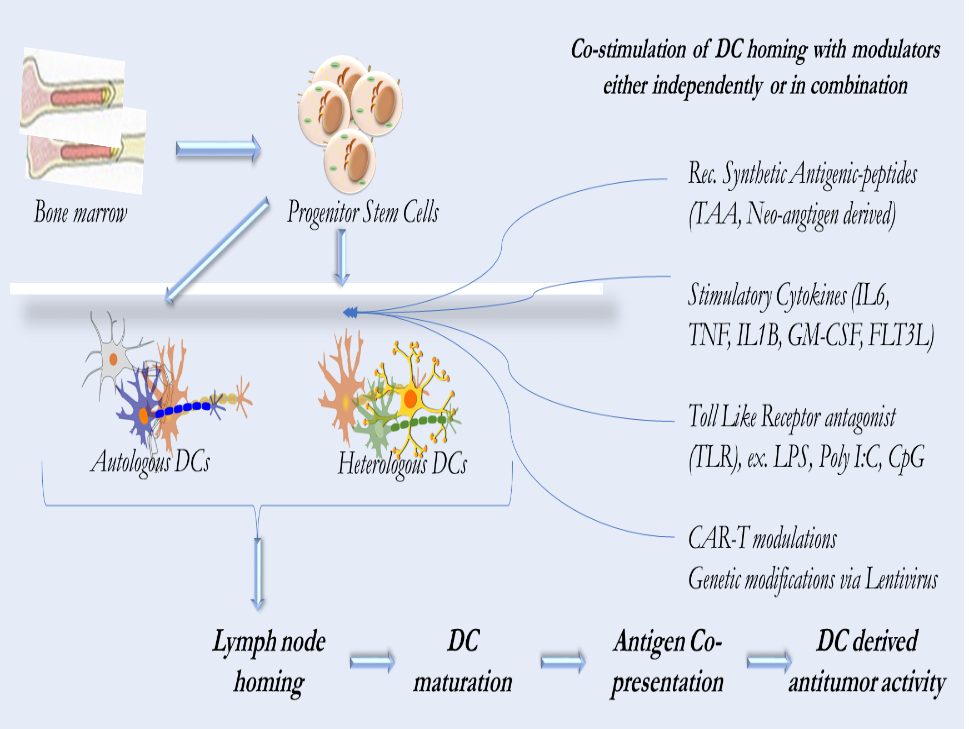 Basic approach involves isolating either autologous or heterologous DCs from patients followed by invitro introduction of Tumor Associated Antigen (TAA) peptides and/or stimulating with cytokines and subsequently introducing into patients.

The ATC therapy approach indicated by CAR-T in heterologous condition is met with high graft vs. host reaction.

Initial studies included DCs that were generated ex vivo, primed with different forms of antigens, and activated and administered to patients, which established the safety of DCs as a cellular vaccine candidate. The antigens in these studies were synthetic peptides, antigen encoding DNA/RNA.  or whole tumor lysates. These studies also established the expansion of circulating CD4+ T cells and CD8+ T cells specific tumor antigens.

Based on this approach, the United States Food and Drug Administration (US FDA) has approved the treatment of metastatic prostate cancer with Sipuleucel-T,also known as Provenge, which consists of DCs cultured with a fusion protein of Prostatic acid Phosphatase (PAP) and GM-CSF. Although Sipuleucel-T was demonstrated to improve the Overall Survival (OS) of prostate cancer patients, continued studies are needed to show its impact on Time to Disease Progression (TDP).

Further refinements to a DC based cancer therapy approach were based on utilizing a defined subset of DCs based on their MHC I/II based antigen presentation. pDCs have been shown to be better at Type I Interferon (IFN) responses and induced Th1 responses in melanoma patients and at also long-term progress-free survival (PFS). Because of this, approaches are underway to harness pDCs derived from either autologous or heterologous sources. For example, clinical trials that utilize heterologous pDCs loaded with HLA – A2 restricted peptides derived from shared tumor antigens for lung cancers are underway. This approach may offer a novel class of off-the-shelf DC-based therapy that needs further exploration in clinics.

DCs derived from both hESCs and hiPSCs through intermediary HSCs are an alternative to autologous DCs given their high proliferative capacity.  hPSCs grown in the presence of stromal cells or stepwise induction of differentiation into DCs via growth factors and further differentiation into induced Nature Killer T-cells (iNKT cells) can be a potential approach for targeting cancer cells.

Murine/human DC subsets differ on several aspects, including their MHCI/MHCII antigen presentation capacities and their cellular responses, limiting an understanding of the mechanism of action of DCs. Use of humanized mice models will offer a viable option and will take our understanding several steps closer to clinical studies. In addition, hiPSCs derived DCs may be a better option to mitigate the risk of diverse T-cell responses generated by DC therapy. Also, tactical challenges such as route of administration, minimal effective DC per dose, and tumor specific biomarkers cannot be underestimated.

In conclusion, emerging clinical data suggests that therapies based on ICIs is limited due to patients developing resistance and cancer remission despite initial signs of response. Heterogenous responses within the same patient are also another concern. Aspects of ACTs deployed in various ways such as engineered T Cell Receptor (TCR) therapy, Chimeric Antigen Receptor (CAR) therapies are yet to be optimized. Therefore, harnessing the unique capacity of DCs for the efficient activation of T cells and the induction of antigen-specific tolerance holds greater promise as a cell-based therapy for cancer treatments. Extensive preclinical studies indicate that the use of ex-vivo manipulated DC therapies targeting tumor associated antigens can be effective in inducing anti-tumor responses. DCs may offer superior avenues either on their own or in combination with ICI and ACTs due to the various properties of DCs. An understanding of specific subsets with specific capacities to elicit specific immune regulatory pathways along with robust clinical studies will further help in realizing the full potential of DCs as a therapeutic agent either as a stand-alone standard of care therapy or in combination with ICI and ACTs.