Are Allogeneic MSCs Ready For Primetime? 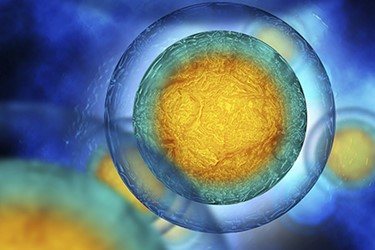 Mesenchymal stem cells (MSCs) are multipotent adult stem cells that are capable of self-renewal and differentiation into cells of mesodermal lineage (bone, fat, cartilage, etc.) [1]. MSCs have been isolated from numerous tissue sources, including bone marrow, adipose tissue, umbilical cord, placenta and dental pulp [2]. MSCs are characterized by the presence of cell surface markers CD73, CD90, and CD105 and the absence of CD14, CD11b, CD19, CD34, and CD45 [3]. Since their discovery in the 1970s MSCs have been extensively studied for their therapeutic potential.

While the regeneration of bone, adipose tissue, and cartilage in preclinical animal models using autologous or allogeneic MSCs has been reported in a myriad of studies over the past few decades, it is now known that one of the primary therapeutic mechanisms of MSCs is via paracrine-mediated signaling and immunomodulation [4]. MSCs secrete factors that are proangiogenic, anti-apoptotic, inhibit inflammation, promote would remodeling, and release exosomes that contain microRNAs that can influence disease associated processes [3, 5, 6].

A lack of homogeneity in MSCs populations has been a long-standing cause of concern regarding its efficacy and safety [7]. Different tissue depots, donors and cell expansion methods have been found to yield heterogeneous MSC populations. Although cells obtained from different tissue depots qualify to be referred to as MSCs based on stemness and cell surface markers, there are significant differences between them [8]. MSCs obtained from specific depots proliferate faster than the others, some exhibit more potent self-renewal capacity, and discrepancies exist in their ability to differentiate. For instance, MSCs from fetal origin exhibit higher proliferation, whereas those obtained from bone marrow or adipose tissue form more colonies and display more robust differentiation in.to osteoblasts and adipocytes [8]. Similar variability is also observed between MSCs obtained from different donors which can generally be attributed to their age, gender, and diseases. Older donor MSCs are more apoptotic and less proliferative, while MSCs obtained from donors having diabetes or inflammatory diseases exhibit loss of therapeutic function [3]. Finally, the method of in vitro expansion of MSCs, choice of media, and passaging can induce heterogeneity in the MSC population as well.

Investigations performed over the years have proven beyond doubt that both autologous and allogeneic MSCs display excellent regenerative outcomes in preclinical models of disease. Consistent with the pre-clinical data, allogenic MSCs have not displayed significant immunogenicity so far in human clinical trials, however they have not translated with similar therapeutic efficiency [9]. The potential reasons for the highly variable clinical outcomes include the induction of immune responses to the cells, dosing variability, and unpredictability of culture adapted and/or cryopreserved MSCs [9].

The use of autologous MSC is a safe therapeutic option as the cells will not elicit an immune response, however it presents some serious limitations for broad clinical application. Obtaining a sufficient number of MSCs is an initial limiting factor, since a large amount of bone marrow or adipose tissue may be difficult to extract or unavailable in the subject [6]. Secondly, since high percentage of the target patient population is elderly or may have co-morbidities, the autologous MSC may have a reduced therapeutic efficacy resulting in poor clinical outcomes. Even if healthy MSCs are available, applying them clinically for urgent situations like myocardial infarction or stroke is untenable due to the time required to extract and expand them [10].  This makes the use of allogeneic MSCs a highly attractive alternative, as donors can be prescreened for having cells with a high therapeutic potential, prepared on a clinical scale, assayed for therapeutic potential after production and stored in ready-made clinical doses that can be readily for urgent clinical needs [11]. This scenario is often referred to as the “universal donor” scheme.  The inherent low immunogenicity of allogeneic MSCs, due to the lack of or reduced expression of MHC Class II antigens, may make them viable candidates for allogeneic transplantation. MSCs express low levels of major histocompatibility complex (MHC) class I, lack MHC class II and co-stimulatory molecules and are inherently immunosuppressive [3, 7].

However, several recent studies have shown that allogeneic MSCs may not be as immune-privileged as initially believed as in vivo studies have shown that host animals produce antibodies against them [9, 12]. Allogeneic MSCs express MHC class II when exposed to interferon (IFN)-γ in vitro, since in an in vivo setting allogeneic MSCs will encounter IFN-γ there is a risk that the host will mount an immune response against them >[4, 13]. Therefore, although allogeneic MSCs have not displayed any serious adverse immunogenic reactions so far, it still warrants more investigation to alleviate the potential risks associated with the therapy.

Autologous and Allogeneic MSC-Based Clinical Trials in the U.S.

As of October 2019, a total of 200 clinical trials involving the use of MSCs have been initiated in the US based on the data collected from clinicaltrials.gov. Out of which 58 trials have been completed, 25 have been withdrawn or terminated, and 109 are currently active or recruiting volunteers. The studies completed so far include 33 phase I, 20 phase II, and 3 phase III trials [14]. All these trials involve interventional treatment of a wide range of diseases using autologous or allogeneic MSCs. The following data has become available from clinical trials conducted in the US over the past decade:

Williams et al. (2011) analyzed the regenerative potential of autologous MSCs for the recovery of scarred myocardium post myocardial infarction (MI). The study included eight patients that received intramyocardial injection of MSCs. No serious adverse effects (SAEs0 were reported in the study and an improvement in the contractility of myocardial scar was observed in all subjects [15].

Hare et al. (2012) conducted a randomized phase I trial to compare the safety and efficacy of allogeneic versus autologous trans-endocardial MSC administration in patients (n=30) with left ventricular dysfunction. Both MSC administrations resulted in low incidence of SAEs and the allogeneic MSCs did not stimulate any significant host immune reaction. Additionally, both MSC treatments resulted in improved cardiac function and ventricular remodeling [16].>

Kharbanda et al. (2014) conducted a pilot study with six patients of hemoglobinopathy to determine the efficacy of allogeneic MSCs for the attenuation of graft versus host disease (GvHD). MSC treatment was not found to improve the survival rate therefore the study was terminated prematurely [10].

Wilson et al. (2015) tested the safety of a single dose of allogeneic MSCs in patients with acute respiratory distress syndrome. The study included nine participants and none of them displayed any MSC infusion related adverse outcomes. However, a week after the infusion two patients died while one developed embolic infarct in several organs. The study concluded that the mortalities were unrelated to MSC infusion and proceeded to phase II testing of the MSCs [17].

Pre-clinical data suggests that allogeneic MSCs do not elicit robust immune responses in vivo which may make them candidates for broadly applied therapeutic applications. To date, data from human clinical trials performed with allogenic MSCs have shown mixed therapeutic outcomes; however, infusion allogenic MSCs did not result in any reported adverse events. The variable clinical outcomes may have more to do with cell dose, route of injection, or alterations during extended expansion.  In order to get allogeneic MSC-based products into the market, much more clinical trial data is required to for their validation. In addition to safety and efficacy, future clinical trials should directly address allogenic MSC immunogenicity and immune responses toward the cells as this data is essential for a thorough understanding of the clinical potential of allogenic cells.